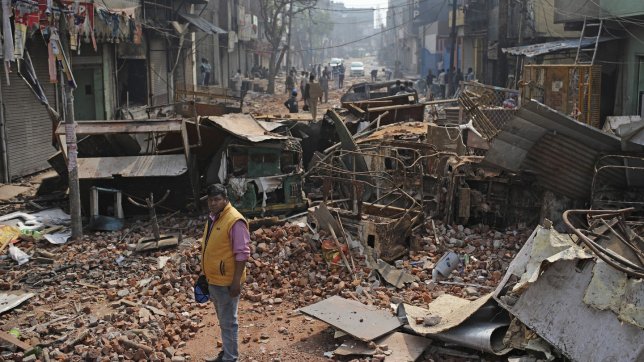 The rout of the BJP in the Delhi election, while very welcome, should not blind one to the fact that the real political struggle is taking place in the streets not in the electoral arena. This struggle is directly related to the secular nature of the Indian state and the future existence of India’s minorities, especially Indian Muslims. Over the last few decades, and particularly the last six years, RSS/BJP propaganda has created a mindset among the Hindu majority, especially the politically influential upper classes/castes, that has put the secular character of the Indian state in severe doubt, despite all that is enshrined in the Constitution. Without this mindset, it is inconceivable that a blatantly majoritarian and unconstitutional law like the CAA (Citizenship Amendment Act) would have cleared both houses of Parliament. But every action has its reaction and the public anger manifested in almost all parts of the country in the last two months is evidence of the fact that defeating the nefarious CAA/NRC (National Register of Citizens)/NPR (National Population Register) triad of the BJP is the most urgent political issue in India today.

This politics is being fought on the streets of every city by the youth, especially young women and particularly Muslim women whose widespread participation in the protests is unprecedented in Indian politics. For this segment of the population secularism is not just some academic legal-constitutional issue. Given the experience of NRC in Assam, the blatantly communal nature of CAA/NRC/NPR can easily lead to a truly horrifying future for Indian Muslims who lack sufficient “papers” to satisfy the whims and prejudices of local politicians or corrupt and venal local bureaucrats. It is all too easy to imagine document-less Muslims and other marginal groups like Dalits being extorted or worse ending up in detention camps labelled as “Doubtful” citizens and asked to “prove” their status and their lives destroyed.

This realization has prompted the response of the youth, mainly Muslims, and especially young Muslim women, but also youth of all religious and ethnic backgrounds fed up with the fascist politics of the BJP. Opposition political parties have generally stayed away from the protests as youth, by and large, are also fed up of politicians. However, opposition ruled states have resolutely opposed CAA/NRC/NPR, several have passed laws in state assemblies forbidding implementation of the law and some, like Kerala, have moved the Supreme Court to have the law declared unconstitutional thus leading to its repeal. It is uncertain how far the states can or will go on this issue if the Court rules in favor of the Centre. This is why public protests are so crucial if not critical to slow down if not reverse this mad rush to a fascist majoritarian state.

At the same time, it can be noted that India, often touted as the largest democracy in the world, has entered a stage where the constitutional guarantee of freedom of speech has become a virtual dead letter, particularly in states ruled by BJP. The mildest opposition to government policy attracts charges of sedition, based on an antiquated colonial-era law, and jailing before any judicial review. The depths to which the BJP-ruled states have plunged on constitutional rights can be gauged by the action of the police in Karnataka slapping sedition charges on a 9-year old girl for some lines mildly critical of the new citizen law spoken in a school play and jailing her single mother and the school principal. While sedition charges are being filed on students and youth, BJP leaders making hateful speeches urging violence on protestors are treated with kid gloves or simply ignored by the authorities.

The situation has now reached a boiling point in the national capital region of Delhi, where the Aam Aadmi Party (AAP), having won the recent election by routing the BJP, controls the local government but the police force is under the control of the Central government headed by BJP. Smarting from their electoral defeat local BJP leaders have decided to embark on a program of aggressive violence against the peaceful protestors holding copies of India’s Constitution to dislodge them from the streets. At the time of writing, this violence has led to over 11 deaths (in private accounts, 35 deaths) and widespread arson and destruction in mainly minority Muslim neighborhoods in the capital. Aggressively violent Hindu mobs, often in connivance with local police, are attacking minority Muslims on the pretext of clearing the streets of the peaceful protests. Reports are pouring in of mobs armed with sticks and guns chanting Jai Shri Ram while Delhi police look on benignly. Journalists observing the mobs have been assaulted and shot at and their videos deleted. The situation is eerily reminiscent of 1984 when several thousand minority Sikhs were eventually butchered by mobs in Delhi after the assassination of Prime Minister Indira Gandhi by a member of her bodyguard who happened to be a Sikh.

The AAP government and party meanwhile, which until now carefully threaded its way past majoritarian Hindu sentiment by refusing to comment or take a stand on the regressive citizenship laws as an electoral strategy, now finds itself reduced to a mute spectator in the face of the out and out violence triggered by the BJP. As a commentator in the Telegraph newspaper of February 25 put it: “The limitations, if not perils, of the AAP’s strategy of ignoring the protests against the new citizenship matrix to prevent polarization were on full display as the Kejriwal government could do little when rioting broke out in northeast Delhi.”

A close friend and colleague, a true Gandhian and believer in the efficacy of non-violence, was on the scene in East Delhi today (Feb 25) observed both the Muslim protestors and the Hindu attackers. He wrote in a personal e-mail: “There was a stark difference in the two agitating crowds, one carefree and authoritative and the other defensive. How unequal are the securities of Hindus and Muslims. Hindus have police and a massive network of religious zealots to crush any Muslim offensive, even non-violent protest. The Muslims can’t rely on police nor have cadre of zealots one-hundredth in strength. I realized the timidity of my nonviolence in the face of mob violence.”

In India’s largest state, UP, and in Karnataka, both controlled by BJP, normal democratic rights of free speech and assembly have virtually been suspended for anyone who dares to raise a voice against policies of the central or state government. Even mild protests are met by police hooliganism, beatings and charges of sedition that would be considered grotesque in any democratic state. Delhi entered the same territory last December when police went berserk attacking students and committing egregious criminal acts like destroying the library of the Jamia Millia University. However, citizens responded courageously with peaceful civil disobedience protest in the Gandhian tradition. The spectacle of Shaheen Bagh in Delhi where hundreds if not thousands of women have been protesting peacefully all day and night on the street in the cold Delhi winter for the last two months against the discriminatory laws is unprecedented in the annals of democratic protest.

AAP ran in the Delhi elections on its undoubtedly creditable record of governance and its lopsided victory demonstrated the voters’ trust in that record. But on the fundamental existential issues raised by the protests against the divisive citizenship laws its leaders took a pass so as not to offend the growing majoritarian sentiments of some of the voters. But while not taking a stand on fundamental questions may be a clever electoral tactic for a limited time, it is ultimately a weakness that the ruthless leadership of the BJP is poised to exploit to the hilt particularly in a Union territory where the Centre holds many powers it can use to steamroll its opponents.