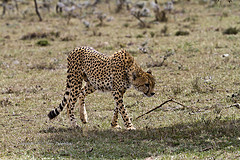 Social media is transforming communication about a continent that did not always have the chance to speak for itself.

Africa is becoming increasingly attractive to international investors, and the growth in its human capital is also very exciting. This new generation of makers, doers, inventors, venture capitalists, bloggers, policymakers – the "Cheetah Generation" as the Ghanaian economist George Ayittey has called them – are the hungry grassroots who have been let down by their governments. All they want to do is reshape the continent.