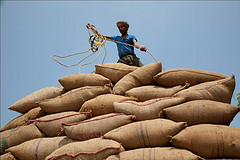 The 2011 Economic Report on Africa predicts a steady growth of African economies. Indeed, the report announces a 5% increase rate for the continent this year compared to the 4.7% recorded in 2010. Although many African countries already benefit from the growth, employment is still a major concern. Africa Renewal’s Kingsley Ighobor evaluates the challenge.

Alimamy Bangura, a rice farmer in Makeni, eastern Sierra Leone, is unlikely to read the 2011 Economic Report on Africa written by experts of the African Union (AU) and the UN Economic Commission for Africa (ECA). The report forecasts a 5 per cent economic growth rate for the continent this year.

"I am just excited that the rains have come at the right time," Alimamy told Africa Renewal. "I got some fertilizers from the government, and everyone wants to eat rice in this country." Read more...