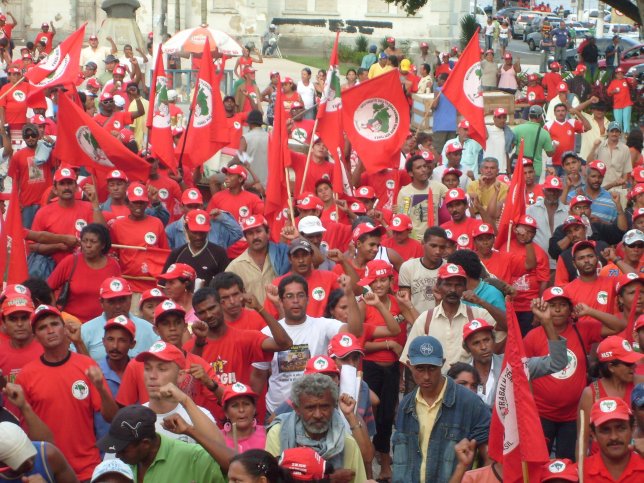 A Brief History of the Landless Workers Movement

While the “Occupy Movement” of 2008 onwards captured the mainstream media’s attention, becoming synonymous with leftist and anti-corporate protest, a much larger and lesser-known movement of “occupying” has been going on in Brazil for over 30 years. The Landless Workers Movement (MST, Movimento dos Trabalhadores Rurais Sem Terra) began in 1984 with hundreds of landless farmers occupying little-used land throughout Brazil. The movement is considered one of the largest and most significant leftist movements in Latin America, providing support to similar efforts in other countries and pushing for agrarian reform within Brazil.

The MST is more than just a peasant’s movement. It seeks to restructure Brazil’s social, economic, and political by “(1) strengthening civil society through the organization and incorporation of marginalized sectors of the population; (2) highlighting the importance of public activism as a catalyst for social development; (3) facilitating the extension and exercise of basic citizenship rights among Brazil’s poor; and, (4) engendering a sense of utopia and affirmation of ideals imbued in Brazil’s long term, complex and open-ended democratization process.”

The movement arose in reaction to neoliberal economic policies introduced in Brazil’s government post-military dictatorship. The country shifted from an agro-centric economy to an industrial economy, driving peasants from their land into urban areas. Along with this, changes in agriculture included corporatization of land ownership, increased use of pesticides and monoculture, and mechanization of farms. These displacements of workers led to the formation of the MST as a way to re-claim the land for the people through civil disobedience and organized mass action. However, the true origins of the movement can be found much further back in Brazilian history.

Power in Brazil has always been linked to land-ownership. Beginning with colonization, as with most Latin American countries, status and prestige were connected to land-ownership, a category almost exclusively held by people of European descent. Indigenous peoples and peasants were forced to work the land in near slave-like conditions in the latifundio system. Throughout this time there were well-known movements of resistance by indigenous peoples, such as Sepe Tiaraju or the Guarani tribe, or quilombos, communities of runaway slaves. Land reform protests were common in the 1950s and 1960s. The current MST sees themselves as “heirs and successors of their struggles,” recognizing that their condition is not unique or isolated in history.

The latifundio system prevailed into the early 20th century until reforms in the 1930s officially abolished it. These policy changes did not, however, completely right the system, which was still riddled with inequality. Tension between rich and poor, generally aligned with race, continued. Brazil came under military dictatorship in the 1960s, which continued into the mid-1980s. In the 1970s, Brazil began to deforest areas of the Amazon in the northeast part of the country to create more arable land for ranching. As land became scarcer in the south of the country, ranchers moved north and bought the newly created land. The rural workers who had lived on this land now were often hired on by the Southern ranchers to work, oftentimes leaving them with nothing to call their own. Major dam projects in this region also lead to further displacement of peasants.

When the MST was founded in 1984, thousands of rural workers joined in order to gain some semblance of power. Many of the founding members of the MST were children of farmers, who found themselves without land after the reforms and forced to migrate to urban areas. Some were intellectuals, basing the movement in Marxist theory. MST occupies land that is unused, or not used to its fullest potential, often owned by wealthy individuals who have no interest in agriculture. MST then engages in lengthy legal battles with the government to expropriate the land for themselves. These legal battles have gone on for upwards of a decade at times, and sometimes end tragically with occupiers being shot dead by ranchers or the Brazilian military.

Once expropriation is achieved, however, the once-landless workers find themselves able to create the kind of agrarian system they see ideal. Most take on cooperative structures, turning into established communities with their own schools and infrastructure. Many sites of the MST have found ways to sell their crops or produce in the national market through government programs for schools or the poor.

The movement became a presence the Brazilian government could not ignore in the early years of its conception, achieving legislative victories in agrarian reform policies in 1988. Every five years the MST holds a National Congress with a different motto that reflects its goals during that time period. Thus the movement seeks to change as Brazil’s political, social, and economic landscapes change.

The movement has seen much success, with over 400 associations and cooperatives that work collectively to produce food without pesticides or GMOs, over 90 agribusinesses that improve income and conditions of work in the countryside, and over 2,000 public schools in settlements that provide access to education for over 160,000 landless children. Today, the movement has an estimated 1.5 million people in informal membership and has influenced the government to give out 43,000 square miles of land to peasant families.

Despite its progress, the MST has had its limitations. The election of Luis Lula da Silva to Brazil’s presidency and the advent of a Worker’s Party in 2005 were originally hailed by the movement as a new age of cooperation with and greater support from the government. However, the Lula government was slow to move on land reform and redistributing territory to peasants. The MST adjusted its strategy to work more with the government, however continued to execute massive protests, occupations, and demonstrations. While they originally supported the election of Dilma Rouseff, her government appears to allow even less involvement from the MST than Lula’s. It seems the MST may be facing a reconfiguration where it expands its focus from a single-issue, to a more transversal stance. This has been evidenced by its increasing involvement with other grassroots organizations.